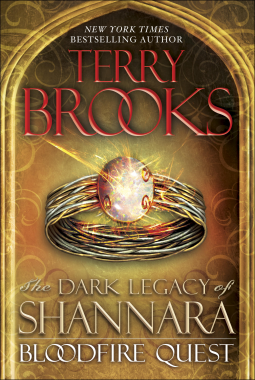 Bloodfire Quest is the 2nd of three books in the Dark Legacy of Shannara series by Terry Brooks. We take up the adventures of Redden and Railing Ohmsford and their companions as they try to rescue their friends and stop the Forbidding from crumbling. Some of their friends are trapped inside the Forbidding along with the demons and their army. If the Forbidding should come down, the demons will sweep over the Four Lands and decimate everything in their path. The Ellcrys, the magical tree that powers the Forbidding, is dying and only young Arlingfant Elessedil can carry her seed to the Bloodfire so the Ellcrys can continue. She reluctantly leaves on this quest with her sister, the druid Aphenglow.

Of course, this wouldn’t be a Shannara story without opposition and help from unexpected sources. Arling and Aphen are aided by Cymrian, a strong elf who has a crush on Aphen. They are also given use of the Elfstones to help them seek out the Bloodfire before it’s too late. They are stalked by forces from the human-led Federation who want to know what they are doing and possibly stop them.

Redden and Railing command the magic of the Wishsong and are trying to find each other. Redden is trapped in the Forbidding with the Ard Rhys Khyber Elessedil, leader of the Druids. They encounter creatures of Faerie – goblins, dragons, and far worse – all creatures bent on destruction. Railing is hurt and under attack in the Four Lands, barely able to help defend himself and the party with him and unable to follow after his brother.

The story progresses as the characters try to accomplish their various tasks and are hindered by creatures, monsters, or magic. At times, they are left wondering what to do next. Many hints are dropped that Grianne Ohmsford, the Ard Rhys from 100 years before who has been missing for a century, must be found in order to set things right. The King of the Silver River appears to say that this might not be the case and provides some assistance that we’ll likely see revealed in the 3rd book when it is published. The heroes seem to meet with trials and we’re left wondering how they will emerge victorious as the odds keep stacking against them.

My Thoughts: Fans of Terry Brooks will likely feel as if they’re treading somewhat familiar territory. We’ve been inside the Forbidding before, been on a quest to the Bloodfire, and faced overwhelming odds with seemingly little hope of emerging victorious. At the same time, the situations are different and we see the darkness that Allanon’s shade hinted at in the first book. In earlier stories we had some hints about how the characters might survive and overcome evil, but here we’re left with the idea that we’re not seeing the bigger picture and that the ending will be very different from what we expect. This is definitely a middle book in the series and I wouldn’t read this by itself. I’d recommend reading this after being familiar with the Shannara world because there are many references to past events, people, and magic. That being said, the story works to move us toward the conclusion in the next book and I look forward to seeing how the characters fare and the changes that will come to the Four Lands as a result.

Disclaimer: I was provided with a preview copy of this book, with no expectations on my part. The opinions expressed are my own and were not influenced in any way by others.